Preparing for Democratic and Peaceful Elections

University of Makeni - News - Preparing for Democratic and Peaceful Elections 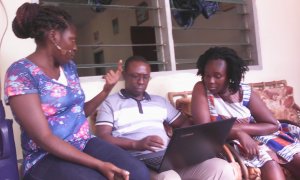 Recently a training of trainers on the promotion of democratic and peaceful election in 2018 elections in Sierra Leone was conducted. The training brought together participants from all regions of the country for a period of one month. In turn the trainers will train about 360 people from all sectors of society on the peaceful conduct and monitoring of the elections.

According to the 2015 Census Report the present population of Sierra Leone is 7 million. Statistics from the National electoral Commission indicated that only 3.5 million people are eligible to vote and be voted for during the 2018 general elections.

The Association Rondine Cittadella Della Pace Alumni International Peace Lab facilitator Jessica Hallak concluded the training. She was impressed with the level of commitment exhibited by the participants. “Attending all the sessions of this training for the four weeks period means a lot. It means you are committed in promoting good governance in Sierra Leone.” She explained.

At the end of the training of trainers the 12 participants expressed satisfaction over the level of training received during the one month period. Antony Newman Levey is a participants residing in the southern capital Bo. He said travelling to Makeni every week from Bo to attend the training was significant. He like most of the participants believed that the training built their capacity to monitor and report the electoral process before, during and after the 2018 elections. A resident of Freetown Margaret Dauda also narrated that she now knows the different electoral management bodies and their role in the 2018 elections. “It is not only about monitoring the elections, it is about understanding the functions of the EMBs” she said.

The University of Makeni Director of Human Resource Veronica Kamara explained that based on the previous and current elections, it is evident that there is lack of awareness for voters regarding the election process. First, there is a lack of “knowhow” on monitoring of elections from state and non state democratic institutions and there is limited awareness raising on how to register and how to vote. “Rondine and the University of Makeni want to bridge this gap and foster a free flow of information during the electoral process” she noted.