Students From The Republic Of Guinea in UNIMAK 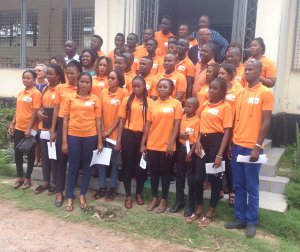 34 Guinean students from King Mo Roi the 6th University arrived at the University of Makeni (UNIMAK) on the 5th August 2018 to learn how to write, read and speak English.

In his address during an orientation for the students at the beginning of their four week course, King Mo Roi 6th University lecturer Moussa Camara praised the high level of hospitality displayed by staff and students of UNIMAK upon their arrival. Mr. Camara informed journalists that UNIMAK is their second home as the decision to partner with UNIMAK is a step in the right direction for the Human Resource Development of Guinea and Sierra Leone.

Early this year the founder of King Mo Roi 6th University signed a partnership agreement with UNIMAK not only in learning how to write and speak English but to entirely cooperate in other fields of academia and development. The signing of this agreement was described by many here at UNIMAK as the beginning of new chapter in the promotion of higher quality education in the Mano River Union. This is the first time UNIMAK is in agreement with a Francophone University in the West African Sub Region since it inception in 2009.

Dean of Commerce and Management Victoria Iheancho admonished the students of King Mo Roi 6th University to be steadfast in their ambition to write and speak English well. Madam Iheancho was happy to hear that previous students from the King Mo Roi 6th University are performing well in their jobs. “I am happy that majority of past students who attended the training gained meaningful employment upon their return to Guinea after they completed the one month period at UNIMAK” she explained .

Guinea is a French speaking country in West Africa that shares a border with Sierra Leone. This is the third year students of the King Mo Roi 6th University nave come to UNIMAK.

Accounting Science students Sory Keita said in an interview that the UNIMAK environment is good for learning . “There is no noise on campus. The environment is quiet” he said. Like most female students Linguistic student Mabinty Camara praised the organization and professional skills of lecturers at UNIMAK .”They organize an orientation for us. Everything is formally done,” Miss Camara explained. She is confident of increasing her knowledge and ability in public speaking. The majority of the students promised to inform colleagues from other universities in Guinea to come to UNIMAK to increase their ability to read, write and speak English fluently.